Hallmarks of a Normal Person 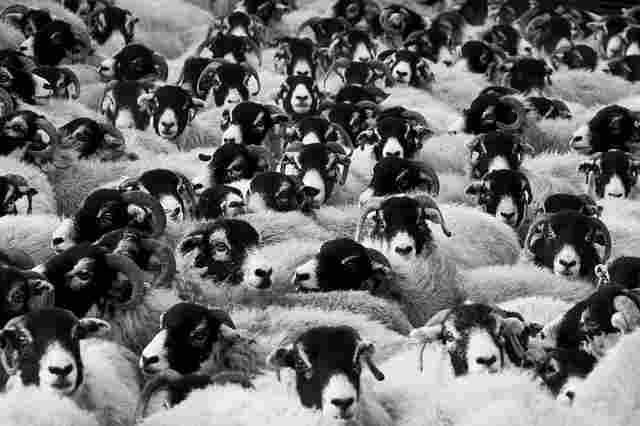 If you only learn one thing from this website, let it be this: avoid normal people.

Because normal people will talk you down, slow your momentum, and do everything they possibly can to keep you in their crab bucket.

Let’s take a look at the traits of normal people, so you can identify and keep your distance from them:

1. Normal people live above their means:

Many make close to minimum wage, have little to no money in savings and mountainloads of debt (negative net worth!). But you’ll find them wearing $200 pairs of shoes, $300 leather purses and a holding a $999 iPhone.

Some will voluntarily borrow money to travel.

In their mind, traveling to exotic locations, even when they are broke is a sign of “being modern and free”.

You are correct, normal person, but in your case, the experience will be a personal debt trap and a midlife crisis.

2. Normal people know everything about sports, TV shows, and movies:

Meanwhile, they do not know the stats behind their own finances. Most don’t even have a rough idea of how much they have in their bank accounts at any given point.

3. Normal people follow celebrities and want to be famous:

Normal people keep in touch with what the Kardashians are up to, they know how many children Angelina Jolie has and their names, and they crowd around every famous person they see.

They want to be famous but they are not smart enough to notice that fame only brings unnecessary harassment and scrutiny in your life.

As a result, they worship celebrities and simultaneously hate them out of jealousy.

“You’re really good at this, why don’t you start a side business around it and eventually quit that job you always seem to be complaining about?”

They completely fail to grasp the concept of risk, rewards, and probabilities.

They fail to grasp that a side business is a low-risk venture because you’re doing it along with your job, but it has a high-return potential. They think every small business will fail due to risk risk risk (extreme negative).

Meanwhile, these same risk-averse people will put 80% of their portfolio in a single stock, because they know that the stock will double in value in 2 months (extreme positive)

Normals will tell you they want to get rich and famous (see point 3), but they don’t really want it enough to do anything about it.

They want it in a way where it is given to them for little to no effort, like a lottery ticket or someone just handing them money, but they will not put the work that goes into actually getting it.

What they really want is an average life they can complain about.

They want that meaningless promotion at the job they hate working, they want to spend their time watching other people get rich (and pay for the tickets too), and they want to meaninglessly talk about “life” all day with their “friends”.

(A really easy way to spot normals in third world countries is when they say things like: “I hate my country; I just want to get a job in the USA (or any other first world country) and settle there”.

There is nothing wrong with emigrating if your country does not have enough opportunity, but if the goal of their life is just to move abroad, get a job, and settle there – there’s a 99% chance you’re dealing with a normal.)

Normal people do not stop talking about politics.

They watch political rallies in the news, and they get upset about what xyz politician says or does. (Upset about things they can’t control)

Instead of observing and learning from the rich so they can get rich themselves, they choose to hate the rich instead.

They think income inequality is the problem and that rich people somehow stole wealth from the poor “to whom it belongs” – they fail to see that the rich did not steal wealth, they created it.

Funnily enough, they wish misery upon rich people, and then get mad that rich people want to have nothing to do with them.

(This part does not apply when talking about corrupt people who gained their wealth illegitimately.)

8. Normal people will give you bad advice:

Normal people will give you advice that’s designed to slow you down or make you feel more insecure.

In the guise of helping you, they will set you up for eventual failure.

Common examples include: Telling you to push for that 5% raise (which will mess up your political capital with the firm), telling you that appearances don’t matter (and ruin every first impression you make), and telling you that you are perfect (so you think you have nothing to improve).

9. Normal people ask questions that they can Google in 1 minute:

Normal people do not value their own time; do not expect them to value yours.

They will ask you 10000 questions that they could have easily Googled and waste your time. And if you don’t answer them, they think you’re the asshole.

(Never answer questions that could have been easily Googled. When someone asks you questions that have easily available answers, they are basically saying that they do not consider your time to be worth anything.)

I was meeting up with a few “friends”, everyone shows up an hour late, some even more than that. Okay, there’s traffic, I’m not a very rigid person, so no problem.

I’ll reiterate: Normal people do not value their own time; do not expect them to value yours.

And they think I’m an asshole because I don’t take their calls or show up to their meetups anymore.

11. Normal people “live life” by polluting their bodies and minds:

They kill brain cells and damage their organs by drinking copious amounts of alcohol and smoking cigarettes.

They love cola, they love donuts, and they love to party all night.

No wonder they are depressed.

They probably haven’t read a single book since they completed their education.

They are extremely hesitant to drop $20 on a good book but are more than willing to pay $20 for a beer (which is actually bad for them).

Normal people are emotional and as a result easy to influence.

They can easily be made to feel happy, angry, sad, and hyped – in fact, the media relies on their ability to manipulate people’s emotions to sustain their business.

They get manipulated by political speeches, by fake charities asking for donations, and by scammers selling them get-rich-quick schemes.

They think emotions “just are”, and they have no control over them.

Normal people procrastinate half their time away, don’t get anything done until they are right at the deadline, and live extremely lazy lives in general.

They are “too busy” to go to the gym.

They are “too busy” to meditate.

They are “too busy” to read.

They are not too busy to spend half their day watching TV.

Normal people will hate you for succeeding.

They will stalk you on social media (delete it) and will try to hurt you “to get even”.

They love to remind you of “where you came from”.

They will do everything in their power to make you fall.

They don’t have the balls to openly do it, so they will try to set you back by using backhanded means.

Unfortunately, they’ll never get ahead and will always attribute your success to luck, genetics, and “privilege” instead of pain, sweat, and effort.

Hope this helps you identify and avoid the normals.

Further reading: A day in the life of a loser by WallStreetPlayboys (an outstanding blog)

Special Announcement: Volume 1 of “The Newsletters of Life Math Money” is now released.

As usual, I would appreciate you sharing this article. It helps me reach a bigger audience. Use the buttons below: