Hypefury Review (From Over a Year of Use) 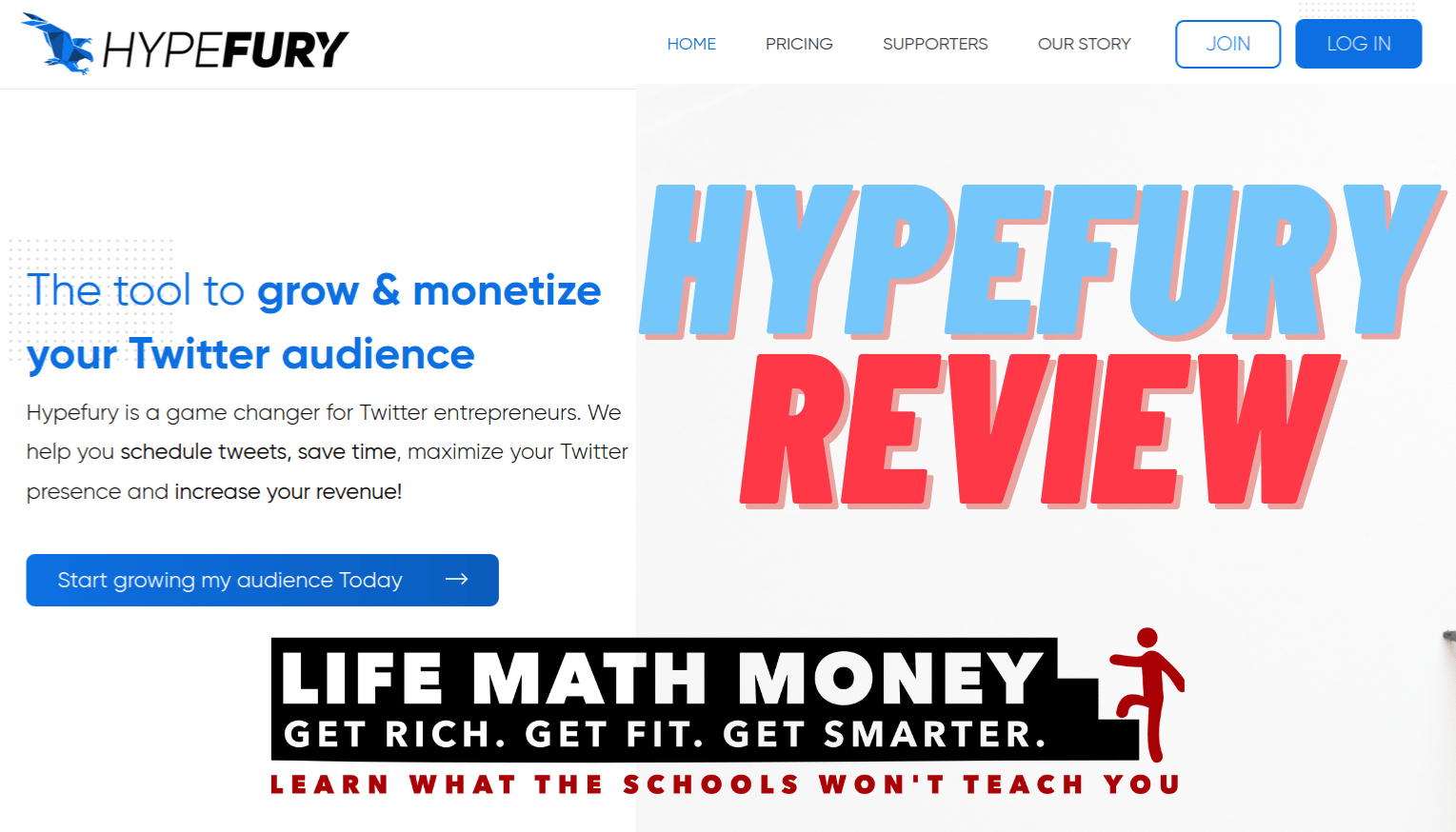 Update: Hypefury is a dishonorable company that scammed us. Do not use them. Use Zlappo instead.

We strongly recommend staying away from Hypefury as their team is not trustworthy and have defrauded their business partners and defaulted on their business obligations. Do not give cheaters access to your business’s social media. You have been warned.

Check out an alternative software called Zlappo. It does everything Hypefury does at half the price.  Here is a feature by feature comparison of Hypefury and Zlappo.

Use coupon code “honestyisthebestpolicy” to get a 10% off.

I have a pretty nice Twitter following (almost approaching 200k followers!), and I’ve learned quite a bit in the process of building it.

This post reviews the software I use for automating my Twitter feed: Hypefury. I’ve used them for about a year now, and I’ve posted hundreds if not thousands of tweets with it.

Hypefury is a Twitter automation software that lets you queue your tweets and set specific times when they’ll be posted.

The basic idea is that instead of sitting on your computer and manually posting tweets every few hours, you can schedule them in advance so you can free up time for other tasks.

It’s fully web-based and optimized to run on your browser, both on your computer and mobile.

Normally whenever I have a thought that I could use as a tweet, I just pull out the phone and schedule it to my queue. This way, my queue is always full of tweets and I never have to sit and think of something to write.

Hypefury has all the features you get from a standard Twitter scheduler like Buffer or Hootsuite. What makes it interesting (and why I use them in particular) is their Twitter-specific features that other well-known software don’t have. 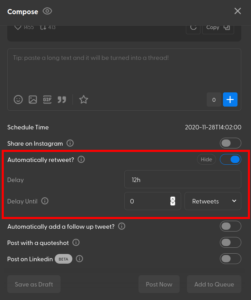 This is a pretty interesting feature that the Hypefury team built on my request.

If you want more people to see it, you need to retweet it a few times, especially about 12 hours after posting it (to tap into different time zones).

Hypefury does this automatically. I Tweet at 2 PM, and 12 hours later, at 2 AM the next day, Hypefury will automatically go and retweet my Tweet.

This is good because it allows more people to see my content and lets me reach the part of my audience that lives on the other side of the world.

As far as I’m aware, Hypefury is the only software that has this feature.

You can set up Hypefury to do the automatic retweeting with the time gap of your choosing, but I recommend 12 hours because that’s when you’ll reach a completely different audience. 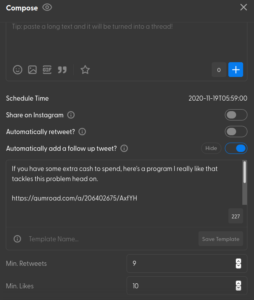 You can set up Hypefury to automatically add a tweet as a reply after a given threshold of likes/retweets has been met.

I occasionally use it to add sales tweets to popular tweets.

It makes quite a bit of money automatically.

I’ve also used it to build my email list by posting a sign-up link under tweets that are doing well. 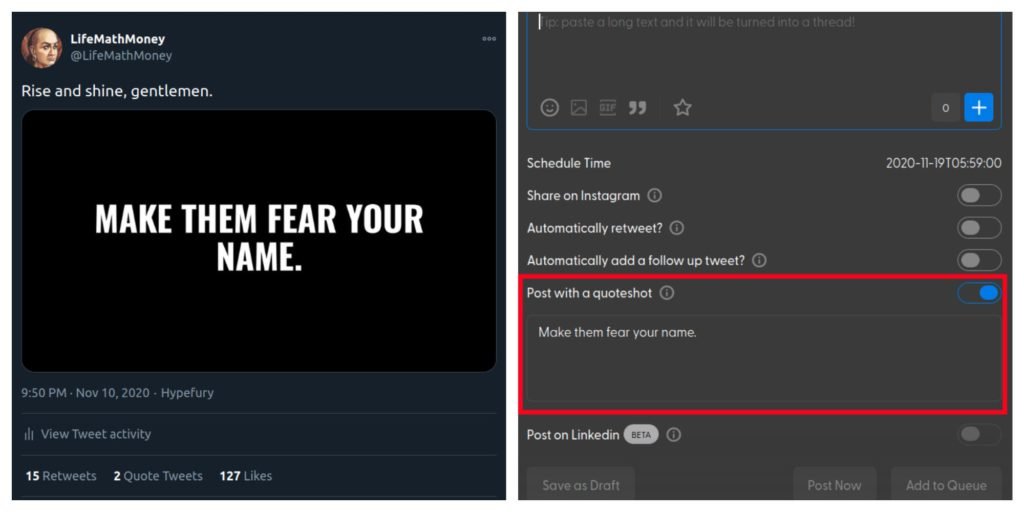 This is a pretty fun feature that adds an image to your tweet that contains whatever text you put in the box.

I use it mostly for fun purposes, but it definitely helps your tweet stand out from the crowd.

I find that motivational tweets do well in this format. 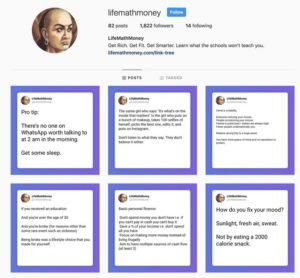 This allows you to get more “juice” from your content by allowing you to grow on another platform without having to produce separate content for it.

This is how my IG feed was originally being run (and how I started there). It works well, but now I use Pikaso + Zapier to run my IG page because it’s more automatic.

As far as I’m aware, this is the ONLY major service that can schedule threads (also known as tweetstorms) on Twitter. (A Twitter thread is a series of tweets replying to each other.)

This feature is convenient because 280 characters are often not enough, and it’s a serious content limitation to not be able to schedule tweets as a thread.

A good thread that gets many retweets will bring you far more followers than a good tweet that goes viral. Threads take more time to read, the people reading it have gotten to know you a bit more than they would have with just one tweet, and thus they’re more likely to follow you.

There’s a bunch of other features Hyperfury has, like an evergreen library where you mark your tweets as evergreen, add some evergreen slots to your queue (see the image of the dashboard at the beginning of this article), and a random evergreen tweet will be retweeted at that time.

This allows you to get more engagement from your old tweets and keeps your feed full of content for new followers.

The average tweet dies after 3 days. This feature brings them back to life every once in a while.

I have 3-4 evergreen slots in my queue for every day of the week.

If you’re looking for Twitter automation software, Hypefury is the one I recommend.

In fact, I liked them so much that I reached out to them and bundled a free 3-month discount code for Hypefury with my twitter guide, The Art of Twitter.

IMPORTANT UPDATE: We no longer recommend Hypefury. They have scammed us – you can read the whole story here. This is not an ethical company and we apologize for recommending them earlier. Check out Zlappo.  It does everything you need at half the price.

Hypefury has also increased its prices since the publishing of this article and is now extremely overpriced. We do not recommend them at all.

We strongly recommend checking out this alternative software called Zlappo. It does everything that you need from Hypefury at half the price.

You can see a feature by feature comparison of Hypefury and Zlappo here.

And with Zlappo, you do not have to worry about unethical people having access to the customer-facing side of your business. Hypefury has not honored its business contracts in the past and has defaulted on business obligations.

No serious business would like to deal with such people. We recommend staying away from Hypefury.

This is a Twitter focused service that beats many other software. They schedule threads, automatically retweet your tweets, etc.

There are also other minor features I didn’t mention in the article, like a “writer’s block” snap on your composer that shows you a few of your old tweets at random to inspire some new insights and a quote generator for lazy people.

Since they’re Twitter only, they’re always working on features that work for Twitter users and aren’t diverted by building features for other platforms.

However, their team is extremely unethical and scammed us of thousands of dollars in the past. We do not recommend them.